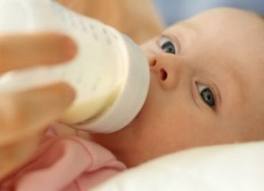 Dr. Pauline Emmett and Vicky Cribb, a nutritionist from the University of Bristol, found that seven out of ten babies have too much salt in their diet. A study published in European Journal of Clinical Nutrition, saw almost 1,200 children aged eight months, who was born in 1991 or 1992.

An infant consuming 700 ml of cow’s milk per day (or 25 fluid ounces) will get 385 mg of salt from that source alone – nearly half the recommended maximum (one gram) to infants over one year. One of eight children studied were given cow’s milk, as opposed to breast milk or formula.

Experts emphasized the danger to consume too much salt, which is known to increase blood pressure. Giving too much salt for young children also can damage their kidneys.