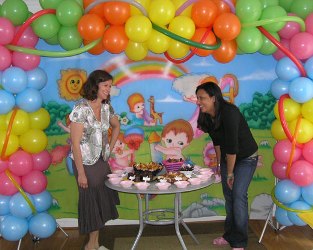 Baby games shower are much more fun since moms-to-be and other invitees in the baby shower can get to play childish games again.

In some countries, a baby shower is a way to celebrate the pending or recent birth of a child by presenting gifts to the parents at a party. The term “shower” is often assumed to mean that the expectant mother is “showered” with gifts. (Wikipedia)

These baby games are the usual baby game showers usually played. They are a great way that would let the clients unify and get to know each other, if they aren’t familiarized yet. This is also another great way to give honor to the mom-to-be for having that cute baby on the way.

This baby game shower makes you NOT say what you are suppose to be attending to! The game Don’t Say Baby is exactly that! Don’t say “baby” during the entire length of the baby game shower for the diaper pin that was given to you upon your arrival will be taken away from you. The person with the most number of diaper pins gathered at the end of the shower party wins a prize.